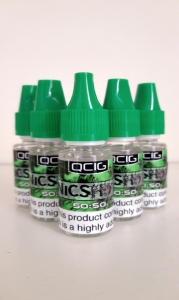 Designed to be used with Large E-Liquid solutions, to add nicotine strength to them.

Simply Pour the contents of this bottle into large 0mg E-Liquid bottles to mix them.

Firstly, This is relatively simple sum, but a calculator will help.
To work out how strong your juice will be after mixing, you divide:
Total Nicotine content by Total ML

So how do you get those numbers? There's a step by step below to help!

​Divide the Total MG by Total ML to get the nicotine strength of the solution. Divide in that order. MG / ML, not ML / MG
Read below for some example equations.

You can save money on this item when you purchase several at a time. The table below shows the minimum quantities required to benefit from this offer, and how much they'll cost.

In order to make a purchase on this website you must be atleast 18 years old, by continuing to use this site you are agreeing to this restriction.